As the sun has now set on 31 December 2011 we now have the data for our first full month of solar power generation. Against both estimates using PV-GIS we have either easily beaten or just exceeded the estimated PV generation for the month depending on the values used.

Using the standard PV-GIS solar values the estimate for December was 68 kWh of generation from 3kWp panel and the alternative estimate using satellite solar values was 101 kWh.

Our generation for the month was 105kWh which for December is an excellent result and hopefully a good sign of the performance we should expect from the panels over the next 12 months.

I have now begun the project to automate the collection and loading of the solar PV generation data from the SMA Sunny Boy inverter and will outline the process in another blog post soon.
Posted by J Drew at 08:12 2 comments:

The difference a day makes, yesterday was cold, dull and wet, a typical December day so our solar PV panels generated very little electricity, a mere 0.65kWh for the whole day.

How difference 24 hours can be! Apart from the sun being so low in the sky today is more like September. Very sunny and warm with temperatures of around 14C, not a typical December day at all. Despite today being the Winter Solstice, the point in the year with the shortest day we have still generated a significant amount of electricity today. As of 3pm we have produced 7kWh and the panels are still generating although it has dropped from the 1800W maximum earlier in the day down to under 200W now. Hopefully this means that from now on into 2012 generation will only increase.

So although salesman might say that all you need for solar panels to produce electricity is daylight and that they generate on dull days too, that is only partly true. For maximum generation you do need sun and lots of it.

Cuts to the Solar PV FITs (Feed in Tariff) have been ruled illegal by the High Court after Legal Action brought by Friends of the Earth and solar PV companies.

The cuts to the Feed in Tariff would have seen the rates slashed from 43.3p per kWh to 21p as of April 2012 for installations after 12 December 2011 despite the consultation that the government initiated not finishing until 23 December.

It hardly seems surprising that this action has been ruled unlawful as cutting a rate while still consulting on it makes no sense at all as I had stated in my blog when the cuts were announced.

These are the daily output figures from our 3.01kWp PV Solar Panel system with Sunny Boy 3000HF inverter. 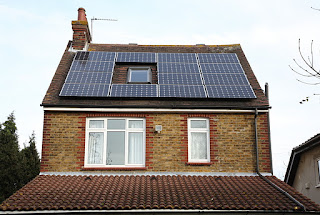 As of 10 December 2011, the total generated for the month is 44.6 kWh which compares to an estimated total of 68kWh for the whole month so we are ahead of target so far.

I thought it would be interesting to show the difference between the output between two days when one is sunny and the other covered in cloud.

Yesterday was a very sunny day with only a very short spell of cloud. The electricity generated by our 3kWp PV solar panels was over 7kWh. Today is a very dull, wet and cloudy day with no sun. The output has been 0.6kWh so sunny days give at least 10x better solar PV elecricity generation than dull cloudy days, at least in winter.

Why does my Solar PV Inverter Read Higher/Lower than my Generation Meter?

The reason is that the inverter reading is an estimate based on the electricity it produces but is not an accurate reading of the output. In contrast the generation meter is a calibrated piece of equipment that has to meet certain tolerances and is tested to ensure that the meter is within these tolerances before it leaves the factory.

So the reading on the generation meter is the correct one and the inverter output reading is to give you a good idea of how the panels are performing at any given moment in time.

At present our Sunny Boy 3000HF inverter is showing a reading of 96.1kWh produced but the generation meter is showing 98.33kWh which is just over a 2% difference between them.

Does Inverter Startup/Kick In Voltage Matter?

A number of installers throw around the startup voltage of inverters as a sales ploy and seems to be particularly prevalent with Aurora salesmen (it must be part of their training ) . A salesman from PV Solar UK used the argument when trying to sell their system to us but logic said something wasn't right if SMA Sunny Boy, the market leader didn't use that voltage.

The Aurora inverters are shipped with a default startup of 200V, which is actually higher than some other makes, but this is adjustable between 120V & 350V, other makes have adjustable startup settings too. An issue which has come to light in the past is that the saleman will push the 120V startup voltage, but when installed it'll be left at 200V .... why ? Well having too low a startup voltage causes unnecessary switch cycling, particularly in the morning, which can result in premature component failure.

Our Sunny Boy inverter started at 0805 producing 12W of electricity and finished at 1545 again producing 12W of electricity. So  the maximum window for increasing production was from 0743 to 0805 and from 1545 to 1549, a total of 22 minutes in the morning and 4 minutes in the evening. Realistically it will only be a few minutes either side that any meaningful electricity can be generated and at less than 12W output (125v/200V) likely to be 7.5W the difference over a year could be a maximum of 3kWh at a cost of early component failure, even the FIT payment of £1.50 isn't worthwhile.

Also when the Sunny Boy inverter starts up at 0805 it is then running for the whole day until sunset. This means that a lower kick in/startup voltage will only have any effect at sunrise and sunset not during daylight hours.
Posted by J Drew at 07:37 No comments: