We've had our worst day so far for our solar panels generating electricity. It looks like solar PV Generation is very badly affected by snow clouds even if it isn't snowing!

The worst day for solar PV generation so far meant that we only generated 0.2kWh today, a mere fraction of other cloudy days and a miniscule percentage of a sunny day.

It appears that the very dense clouds that bring snow also shield a lot of the solar radiation meaning that the panels produce very little electricity in such dark conditions. Even at peak generating time today between 1200 and 1400 we had over an hour with 0 kW produced which is the first day this has happened since installation.
Posted by J Drew at 13:02 No comments:

Today we have achieved our highest peak output since installation in Nov 2011. At 1330 today our 14 solar PV panels rated at 3.01kWp were generating 2388W of electricity which is nearly 80% of their possible output.

Let's hope that the summer brings even higher peaks of generation!


After the High Court decision yesterday to reject the Government appeal over their cuts to the Solar Feed In Tariffs it looks like the solar industry in the UK will be back on the rollercoaster of boom and bust that started in October 2011 with the initial announcement of the cut from 43.3p to 21p per kWh generated. 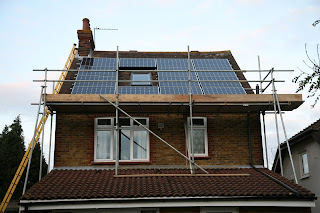 The number of installations between 31 October and the FITs cut on 12 December showed a massive spike with installers scrabbling to get any available supplies to be able to fit before the deadline. This was then followed by a complete drying up of work as the new tariff took effect. 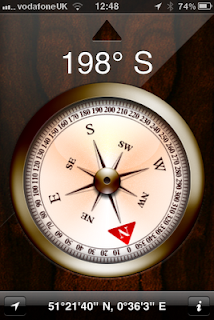 With the new deadline set for 3 March it looks like the same process is happening all over again with reports that warehouses of Solar PV panels have been bought up and installers reporting lack of supplies to be able to install.

Gordon Brown might have claimed he had ended boom and bust but this government seems fairly unique in being able to create boom and bust twice within the space of 4 months!
Posted by J Drew at 00:54 No comments:

200kWh Exceeded and Best day for generation so far

So today we have seen the 200kWh barrier passed and also with a glorious sunny day from sunrise we have set a new record for the generation.

It shows how insignificant the winter months generation are when it has taken nearly 2 months to reach our first 200kWh of PV solar generation when in the summer this could be more than achieved in a couple of good weeks.

Today we have generated 8.8kWh of electricity. Compared to the summer it isn't a huge amount but for winter is a result that we are very pleased with. The forecast for tomorrow is equally good so hopefully we may get an even better output tomorrow with the marginally longer day.
Posted by J Drew at 08:12 No comments:

This is our real time data on PV Output.org

UPDATE - see feedback below from Nick, since this post I am now using sma-uploader to automatically load my live and historic data from my Sunny Boy inverter to PVOoutput

There is an alternative way to view Sunny Explorer data online if you have some time to set it up. Although it is more clunky than the Sunny Webbox it is free and will save you the cost of buying the Webbox. This only works for SMA Sunny Boy inverters - ours is a 3000HF but I believe it will also work with the TL series such as 4000TL as well.

The FTP batch file copies the screen image to your webserver where it can be viewed from anywhere in the world with an internet connection.

What you will need:


An alternative that I have considered is making use of the Command Line batch processing facility within Sunny Explorer to export the daily generation data to a folder on my server. This folder is replicated
Posted by J Drew at 13:13 2 comments: