Our solar panels have now been installed for 5 years and I've just submitted the latest generation reading for our FIT (Feed in Tariff) payments. The total electricity generated over the last 5 years is an incredible 16,000 kWh. This is way more than the PV-GIS estimates of 2400 kWh when we purchased the panels and equates to around 3200kWh per year.

You can see detailed generation figures for our solar panels over the last 5 years here. These show generation by month as well as year and peak daily generation seen by month.

What problems have we had with our solar panels?

The panels themselves have been great and no real issues apart from pigeons finding them to be a perfect place to build a nest. Fortunately our panels have a velux window in the middle of them which means we are able to open it and get access to the underside of the solar panels. Others with pigeon problems are not quite so lucky!

Apart from pigeons the only other problem we have had was electrical. We discovered earlier in 2016 that the solar panel inverter was cutting out. On investigation the electrician found that one of the terminals on the solar MCB in the consumer unit had shorted due to the wire being loose. 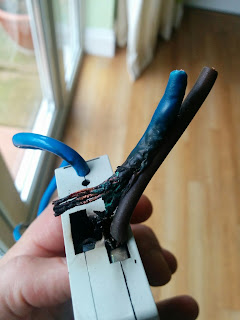 Luckily it was discovered in time and we only lost a few days generation in January - possibly the best month it could have happened!


Would I do anything differently?

Even after 5 years and having a much greater knowledge of solar panels compared to when we purchased I don't think there are any major things I would do differently. Since the panels were fitted we have moved the generation meter inside and altered the wiring so that the inverter remains outside. In hindsight we could have waited a few months and benefited from much lower prices in the lull between the massive drop in FIT payments being announced and implemented but at the time it would have been a huge risk.